Isabelle: Tom Nook! I have terrible news! Mayor Chuy just told me that we’re out of a job!

Tom Nook: What do you mean? Is there nobody in need of a home?

Isabelle: We’re all in need of a home! Don’t you understand, man? There is no new Animal Crossing game!

Tom Nook: They haven’t made a new Animal Crossing game?

Isabelle: No! Or Maybe? I mean you’d think they would have told me! Afterall, I am their best employee… or was.

How long does it take to make a new Animal Crossing game? If we want to see the next game announced at E3, we need to know if Nintendo has had enough time to make the game. Or at least, develop enough of it to show us something at E3.

In this episode of Is It Time For Animal Crossing Switch, I break down the development times of each mainline game. I also want to take a look at when each game was announced and then released. I believe that information will be revealing of how long it takes Nintendo to have enough content to make their announcement.

The hardest development cycle for me to determine was for the very first Animal Crossing game. The only evidence I found about the development of the first game was a post on Quora and it is questionable at best. The user stated that before the game had an official name, Miyamoto had mentioned that his team was working on a “communication game.” This “communication game” was mentioned in 1999, however, I was unable to verify this claim so I wouldn’t call it evidence.

Katsuya Eguchi is credited as the mind behind the concept of Animal Crossing. Edge Magazine interviewed Eguchi and found that he got inspiration for the game when he first moved to Kyoto to work at Nintendo in 1986. He wanted to create a game that explored the feeling of loneliness in a new town away from friends and family.

However, the original Animal Crossing was released on the N64 in Japan on April 14th, 2001, not in 1986. What was happening between 1986 and 2001? Well, a lot! Katsuya Eguchi was working at Nintendo and worked on many different games before his idea finally came to fruition.

Before Animal Crossing, Katsuya Eguchi was working on games such as Super Mario Bros. 3, Star Fox, and Wave Race 64. However, I want to focus on the games Eguchi worked on right before Animal Crossing. In 1997, Eguchi was credited as the Chief Designer on Yoshi’s Story for N64. In 2000, Eguchi had an Advisor role on Mario Artist: Talent Maker for the N64 64DD or Disc Drive, a failed add on to the N64, however, an add on that plays a role in Animal Crossing.

After Yoshi’s Story in 1997, it was clear that Eguchi’s focus had finally moved to Animal Crossing. The game was originally going to implement the 64Disc Drive to give the game a real time clock. The development eventually moved away from the disc drive and had players manually set the time when they logged into the game.

Regardless, between 1997 and 2001, Animal Crossing was produced and distributed. That means the game went through a 4 year development cycle before it was released. But the development was more complicated than this 4 year period. Though the game was released on N64 on April 14th, 2001, it didn’t make it to the gamecube until December 14th, 2001. Even then, production wasn’t over and the game underwent significant changes when released in North America.

The game underwent further development adding a lot of dialogue and holidays that are now a staple to the series. These were completed and the game was released on September 15th, 2002. These changes were well received by Nintendo of Japan and the game was once again released in Japan in 2003 to include the extra features as well as a few other quirks.

In conclusion, it took the first Animal Crossing game around 5 years to be developed, produced and released in its final state.

Alright, let’s talk Wild World! The second title in the Animal Crossing series was first shown at E3 2004 just 1 year after the final version of Animal Crossing was released in Japan. There was footage on a Nintendo DS and the game looked much more like the gamecube version of the game.

We eventually got a 2nd trailer at E3 2005 that showed off the new cylindrical pin world that has become normal to the series today. After that, the game was released in Japan on November 23rd, 2005. North America and Australia received the game in December of 2005, and Europe got the game on March 31st, 2006.

It took Wild World 2 to 3 years to get developed and localized around the world. And Wild World was announced just 1 year after the final iteration of Animal Crossing gamecube was released in Japan.

City Folk was entirely developed, produced and localized in only 3 years. Not to mention it had the shortest turnaround time between announcement and release.

Animal Crossing New Leaf was a big change of pace for Nintendo. While the game was first shown in a 7 second clip at E3 2010, just 2 years after the release of City Folk, the game wasn’t released until the end of 2012 in japan. It took an additional 7 months to localize the game and get it out in North America, Europe, and Australia. In total, it took nearly 3 years between announcement and release in all regions.

This means Animal Crossing New Leaf had the longest development time since the original game. It took them 5 years to get the game developed, produced, localized, and distributed around the world.

As I mentioned, I wanted to keep this video focused on the mainline games so we’ll stop here. And I know I just gave you a bunch of information that can be hard to follow. So this is the part where I summarize my findings in a way that is more digestible for you.

I’m going to be conservative in my calculations and take the longest times I listed for each category. 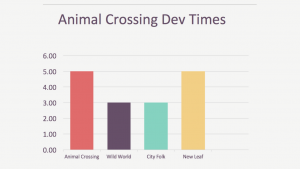 On average, it takes 4 years to make an Animal Crossing game. 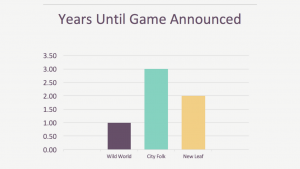 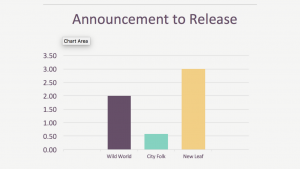 It takes an average 1.86 years for Animal Crossing games to be released after their initial announcement.

Judging by the amount of time that has passed and the time it takes to make a new game, I have reason to believe that an Animal Crossing announcement is definitely possible at E3 2018. However, there are some recent releases that could complicate this situation.

But, you’re gonna have to Tune in next week for another episode that will take a deep dive into the spin offs we have gotten since New Leaf!

Thank you all for watching! Tune in every Friday, for a new episode of Is It Time for Animal Crossing Switch for a look at a different aspect of Animal Crossing and why I think it is time for it to get announced.

And if you haven’t yet, watch last week’s episode of Is It Time for Animal Crossing Switch!

Continue this conversation on my discord!