Isabelle: Resetti! How could you! Did somebody reset their game so much, you had to delete Animal Crossing!?

Resetti: Isabelle, I don’t really delete games, I just used to say that to scare the kids away from resetting their games without saving.

Isabelle: Oh..I thought… well, there must be something really wrong going on. We haven’t gotten a new game.

Resetti: What!? There isn’t a new game!? What’s the setback!?

Isabelle: I’m not sure, I thought you’d have some info, seeing as you work in the network.

Resetti: I just work on the internals! I don’t know what’s going on out there!

What are the Animal Crossing Switch Developers Up To?

Where are the Animal Crossing developers? What have they been working on since the last Animal Crossing game? Well, the answer to this is pretty complicated. Often, we hear that the developers were moved over to Splatoon for the Wii U. While many developers have gone on to work on games such as Splatoon and Splatoon 2, the organization of the development teams at Nintendo has undergone many changes since 2015.

Last week, I talked about the spin off games and a bit about who developed them. If you haven’t watched that episode yet, check the description for a link to that video! Anyways, in that episode I claimed that Happy Home Designer was the spinoff game made by the official Animal Crossing team. Since then, I have been researching a lot of the developers and finding what games they have gone to work on since animal crossing.

The Nintendo EAD development group was incredibly large and often had many games under development at once. Even Software Development Group No. 2 was known to work on 2 games at once. In fact, while they were busy developing and releasing Happy Home Designer for the 3DS, the same team was also behind the development of Splatoon for the Wii U. Both games were released in 2015.

As you can see, Nintendo had access to a huge staff and had many resources to develop many games at once. In fact, The same group behind Happy Home Designer often released 2 to 3 games in a year. Many members from each group could be moved around to different games. After New Leaf was finished, many of those developers were moved to The Legend of Zelda: Link Between Worlds. It was very common for Nintendo to mix and match its teams to get really fresh ideas for each game.

At the end of 2015, Nintendo restructured its development teams. Nintendo decided to merge its handheld and console divisions and formed an even bigger development group called Nintendo Entertainment Planning & Development, or the Nintendo EPD for short. This group has gone on to make a number of Wii U, 3DS, and even Switch titles. Some of the titles include Breath of the Wild and Super Mario Odyssey.

Among some of the projects are some work the teams have done for the most recent Animal Crossing releases. Amiibo Festival, Welcome amiibo, and Pocket Camp are all listed under projects for the Nintendo EPD. However, we do know that amiibo Festival and Pocket Camp were co-developed with NDCube. NDCube is a subsidiary company to Nintendo that has worked on a number of party games such as Wii Party U, Mario Party 10, and amiibo Festival.

The Welcome amiibo update is a good example of the merging of Nintendo’s handheld and home console divisions. The team was a mix of many developers from each of those two groups. The end product was a fairly substantial update to the Animal Crossing New Leaf game.

What the Animal Crossing Switch Developers are Working On

With everything I found about the Nintendo Development teams, I started to wonder what exactly the Animal Crossing developers have been up to. This is also the part of the video I’ve been worried about because… well, I made spreadsheets.. But don’t click away! I promise this isn’t just another business meeting.

I promise to make the spreadsheet portion as short as possible. But it’s necessary so I can explain the nice charts I made at the end. Also, all of this info can be found on my website. Check the description for a link to the post after this video.

Also, on the spreadsheets, I left out the individuals credited for localization because I imagine those teams work on many different games constantly. I also left out other studios who were credited and focused on the individuals.

I took the credits and looked up each developer on the Kyoto-Report. This site keeps a decent record of Nintendo employees. Unfortunately, I cannot verify how accurate this information is, but I think it was trustworthy enough because the credits I wrote down closely matched the credits for the games on their site.

The first piece of information I found was that of the 112 developers I looked at for New Leaf, 81 were credited on games after new leaf. That means, 72.32% of new leaf’s staff was moved from the Animal Crossing team. 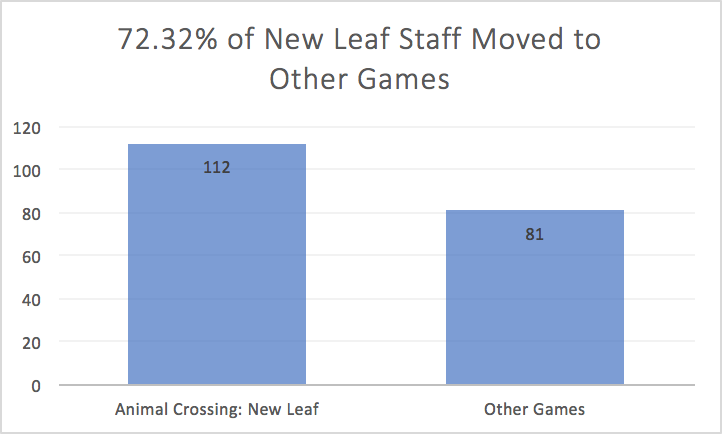 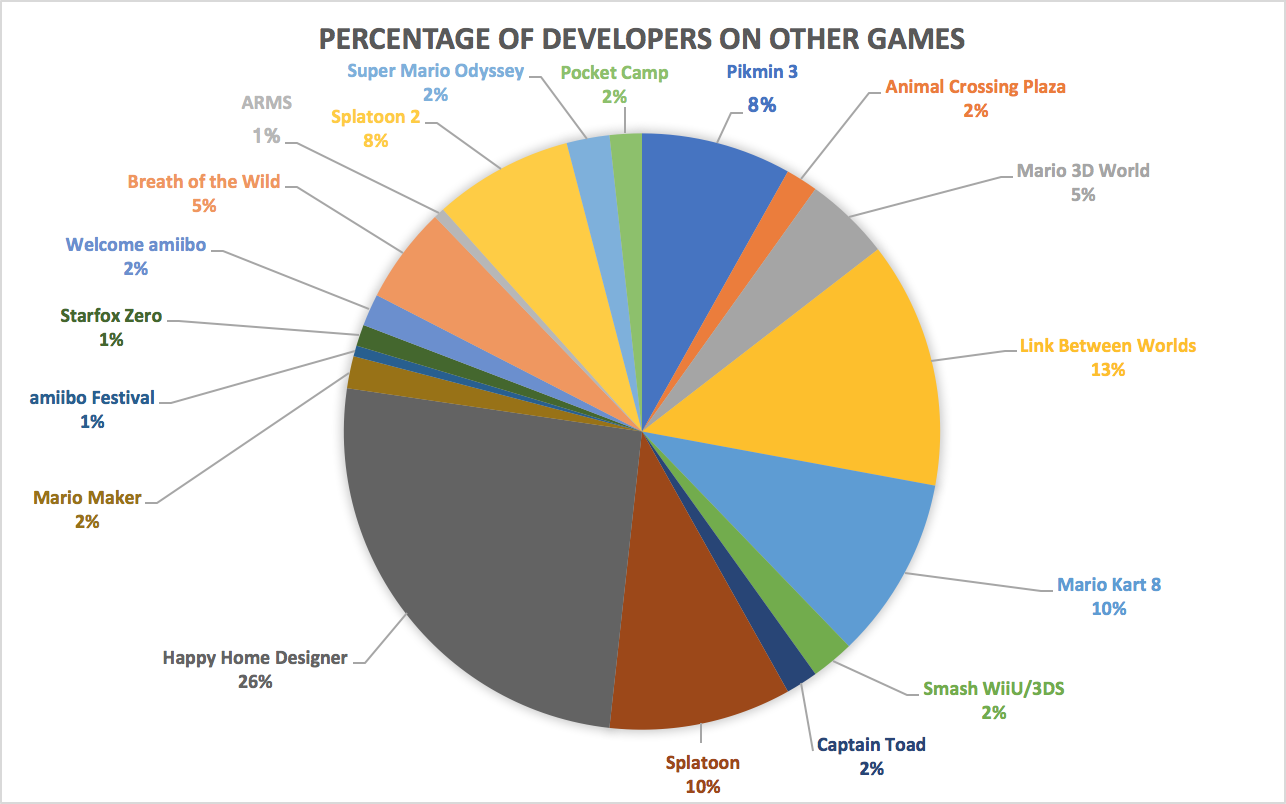 The most significant point of data was that 44 employees went to work on Happy Home Designer. 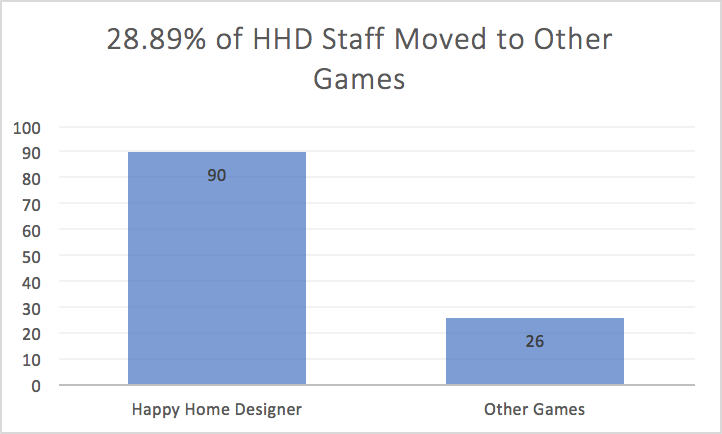 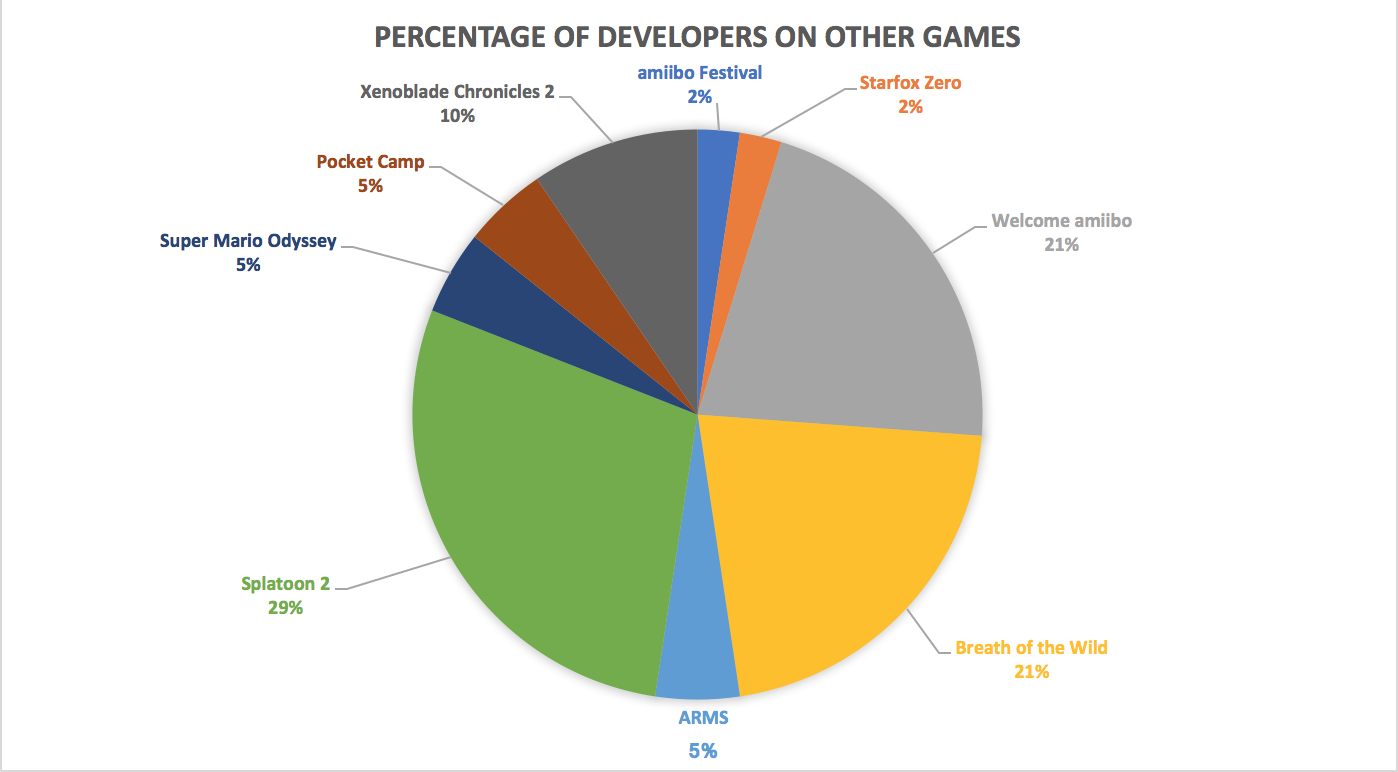 It is important to note that I couldn’t find projects for 27.68% of the New Leaf staff. At the same time, I couldn’t find information on projects beyond Happy Home Designer for 71.11% of the staff on that game. Are these 95 people still part of the Animal Crossing team? Are they still employees at Nintendo? It is impossible to tell, but that is a lot of people who have been left unaccounted for.

While I can’t confirm that these employees are working on the next Animal Crossing game, it is a possibility that some are. Just as it is a possibility that some aren’t. The most important information I do know is that the Directors of New Leaf, Happy Home Designer, and Welcome amiibo haven’t had any major roles beyond those games. Both Aya Kyogoku and Isao Moro could be hard at work on the next iteration of Animal Crossing.

Thank you all for watching! Tune in every Friday, for a new episode of Is It Time for Animal Crossing Switch for a look at a different aspect of Animal Crossing and why I think it is time for it to get announced.

And if you haven’t yet, watch last week’s episode of Is It Time for Animal Crossing Switch!

Continue this conversation on my discord!